Do You Need a License for an Electric Bike? 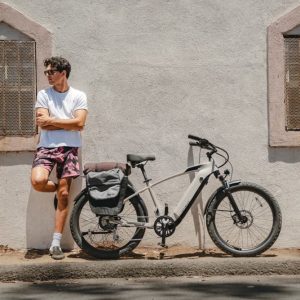 We need a driver’s license to operate motorized vehicles like cars and motorcycles. But do you need a license for an electric bike? It depends–generally, most states don’t require users of electric bikes to have a license. However, some localities define e-bikes as something closer to a motorcycle than a traditional bike and therefore require its riders to follow the same road rules and requirements.

A law passed in 2002 defines e-bikes as: “a two or three-wheeled vehicle with fully operable pedals and an electric motor of fewer than 750 watts (one horsepower), whose maximum speed on a paved level surface, when powered solely by such a motor while ridden by an operator who weighs 170 pounds, is less than twenty miles-per-hour.”

Electric bikes are not considered motor vehicles, so they’re put under the jurisdiction of the Consumer Product Safety Commission (CPSC) instead of the Department of Motor Vehicles (DMV), holding them to the same requirements as regular bikes. But how fast can electric bikes go, how much does an electric bike weigh, and why do these aspects mean they’re not defined as motor vehicles? Nowadays, e-bikes can go up to twenty-eight MPH between 31 to 65 pounds, such as the ones from Ride1Up. These are still considered low-speed vehicles and are legally considered under the same definition.

The Classification of E-Bikes

Most laws that deal with e-bikes, specifically those that don’t define them as motor vehicles, recognize them as categorized into three classes:

Class 1 e-bikes are pedal-assists, so their motor only functions once you pedal. These bikes only go up to twenty MPH.

Class 2 electric bikes have both a pedal assist and a throttle. The latter propels the bike without the rider having to pedal, similar to a motorcycle. Class 2 e-bikes can also go up to twenty MPH in speed.

Class 3 e-bikes are just like Class 2 e-bikes. However, the former reaches speeds of up to twenty-eight MPH, though the motor assistance reduces or cuts out once this speed is attained. They may or may not have a throttle. If they do, the throttle assistance will always peak at 20 mph.

On the federal level, e-bikes are considered consumer-level products, so they’re handled by the CPSC. That means that most of the regulations surrounding electric bicycles involve their designers and manufacturers. For e-bikes to be considered as such (i.e. low-speed vehicles), they can’t exceed twenty or twenty-eight MPH and must follow set technical specifications. So, do you need a license for an electric bike? Any ebike that’s outside of these guidelines will be classified as a motor vehicle.

What e-bike riders really need to pay attention to are their state’s laws on the use of e-bikes. State parks or trails may have more stringent rules when it comes to speed and safety. These vary, so it’s best to check your local regulations to see how it affects your ride. Various states treat electric bikes as motorized vehicles and therefore enforce license requirements, speed limits, maximum power, etc. If states consider them as traditional bikes, they typically have minimal restrictions—these are usually the same states in which you likely won’t need a driver’s license to ride your e-bike.

Here are some other frequently asked questions about e-bike laws:

Do You Need Insurance for an E-Bike?

Only a few states require insurance for an e-bike. Even some states that see them as akin to mopeds (and therefore require license and registration) don’t necessarily need insurance. States that recognize electric bikes as distinct from motor vehicles typically don’t require insurance either.

Do You Have to Wear a Helmet When Riding an E-Bike?

Half of the country currently has helmet requirements for e-bike riders and passengers, with some states requiring them for all ages across all classes. Some states also put the use of helmets as the minimum requirement for anyone riding a Class 3 e-bike, as well as an imperative for younger riders. Depending on local rules, you may be permitted to use a bike helmet. But some states, such as Alabama, may require a motorcycle helmet. Regardless of helmet rules, it’s recommended that all e-bike riders wear one for safety.

Is There an Age Requirement for Riding an E-Bike?

Many states restrict e-bike use to those between fourteen and eighteen years old and above; however, some states permit younger riders when supervised by an adult (over eighteen years old). For states that don’t have age limits, there are usually helmet requirements instead.

We require riders to be at least 18 years of age to ride Ride1Up ebikes.

Good to Go: Ride the Best Value E-Bikes From Ride1Up

Do you need a license for an electric bike? E-bikes don’t necessarily require a license from their riders. Moreover, it’s a super convenient, accessible mode of transportation for many people, whether they’re needing the bike for leisure or work. If you’re ready to go for a ride, check out Ride1Up’s catalog of the best-value electric bikes today!