How Much Does an Electric Bike Weigh? 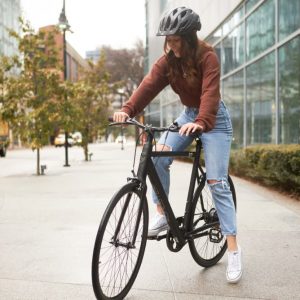 An electric bicycle is a great alternative form of transportation if you’d like to draw the benefits of cycling while keeping the convenience of a motorized vehicle, but it’s important to know what to expect. Aside from knowing the basics, such as whether you need a license for an electric bike, it’s helpful to know a thing or two about the vehicle itself, especially when it comes to weight. Electric bikes are twice (or sometimes thrice) as heavy as traditional bikes because they contain a battery and an electric motor, both of which can easily weigh up to ten to twenty pounds each. So, how much does an electric bike weigh? On average, an e-bike weighs anywhere around thirty to eighty pounds. Ride1Up’s electric bicycles range from thirty-three to sixty-five pounds, depending on the model.

The Average Weight of Electric Bikes

A regular bicycle is around eleven to forty-five pounds in weight. How much does an electric bike weigh? E-bikes weigh between thirty-three to eighty pounds, with an average weight of fifty-two to fifty-five pounds.

Why Are Electric Bikes So Heavy?

Electric bikes are much heavier than traditional bicycles because they have a motor and a battery (plus other electrical components), all of which can easily add up to ten-twenty pounds. They may also carry more weight because they’re expected to perform better, which would entail more components such as wider wheels and stronger frame designs.

Factors That Affect the Weight of an Electric Bike

Here are the components of an electric bicycle that affect how heavy it is:

An e-bike controller is an essential component that connects all electrical parts of the bicycle together. It typically weighs around a pound.

The motor is what gives juice to your electric bicycle to move it forward without pedal assistance. It weighs ten pounds on average, though a hub motor built into a wheel will be heavier by a pound or two.

The battery is where the lion’s share of an e-bike’s weight comes from. It goes for anywhere between ten to twenty pounds, which would be proportional to its capacity—the higher the capacity, the heavier the battery.

Similar to a regular bike, the frame holds a lot of weight in an e-bike. You can opt for lighter material such as carbon fiber or aluminum, however, you’ll have to consider the weight of other components to ensure that everything can operate altogether with no issues.

The wheels on your bicycle can also affect the overall weight of your vehicle. Thicker and wider wheels will be heavier than thinner and lighter ones.

Though minimal, your handlebars could also put some weight on your e-bike, especially if you’re decking it out with bells and whistles like phone mounts or mirrors.

Electric bikes typically have other miscellaneous bits that will add a few more pounds, including wiring, display, sensors, throttles and switches.

Does an Electric Bike’s Weight Affect Its Speed?

Does the weight of an e-bike affect its speed? Well, yes and no. Technically, it shouldn’t—or at least, it shouldn’t be a problem. The motor helps riders turn the pedals and get to the maximum speed, though it will stop as soon as you reach it. The only way the weight could be an issue is if you’re pedaling, especially uphill. But do you have to pedal an electric bike? Not always, but you could; in this case, you can even go beyond the speed limit of your e-bike if pedaling hard. Although, on a heavy bike, this would take a bit more effort.

Is a Lighter or Heavier Electric Bike Better?

For regular bikes, the lighter it is, the better, because it implies better handling and mobility. But electric bicycles are different. The performance of an e-bike is greatly dependent on its battery and motor, and the more efficient, long-lasting, or powerful ones are usually heavier. That means that lighter e-bikes might mean a shorter distance traveled faster, though that’s not always the case; with advancements in technology, electric bikes of the future might get lighter with smaller–but just-as-powerful–motors as the 10-20 pound ones found commonly today.

When asking, “how much does an electric bike weigh?”, it’s important to think about how you plan to use it. If it’s for commuting, then it is not detrimental to ride a heavier-weight bike. This is because you are often on flat or smooth pavement. But if it’s for long-distance travel or biking activities that need more horsepower (such as offroading), then a lighter bike is the better choice.

Ride1Up offers the best value e-bikes at weights ranging from thirty-three to sixty pounds. Choose from a variety of options that fit your needs without having to worry about performance. Check out Ride1Up’s catalog today!