Do You Have to Pedal an Electric Bike? 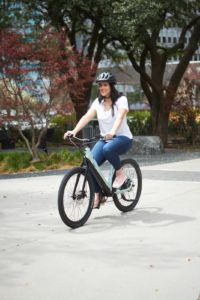 An electric bike is just like a regular bike; the only difference is that an ebike harnesses the power of a battery and a motor. You can pedal them just the same, although you don’t necessarily have to; some ebikes can accelerate without it just using the throttle. But even with bikes like these, you’ll still have to pedal in some circumstances, such as when you’re going up inclines. With the help of the electric bicycle’s motor, though, this won’t take too much effort!

Just how much of a difference do a battery and a motor make on an electric bike? The biggest ways it affects it, and distinguishes it from a traditional bike, are speed, weight, and cost.

With a Ride1UP electric bike, you have a lot more velocity and acceleration over a standard bike, both on flat roads and inclines. And though laws limit the assisted speed of ebikes to up to twenty-eight MPH, they can go much faster if pedaling hard or riding on declines.

Electric bikes are often twice or three times heavier than traditional bicycles because of the battery and motor being designed into the frame. This increases the weight of the frame, plus the added weight of the motor and battery – sometime between 10-20 pounds.

An electric bike will be more expensive than a regular bicycle, but it’s great to have if you ride frequently, commute or struggle to go up hilly slopes. How long do electric bikes last? With proper care and maintenance, it can last up to a decade or more, making it a great investment.

Electric bikes have an electric motor powered by a battery. This motor is controlled by a display mounted on the handlebars that allow the rider to control the riding mode, whether pedal-assist or throttle. With pedal-assist, the motor gives you a boost as you pedal; with a throttle, the bike runs even if you don’t pedal, making it work similar to a scooter.

Some electric bikes can detect if their rider is exerting force on the cranks via a torque sensor, in which case it provides more or less assistance based on how hard you pedal. Others have cadence sensors, which assist you simply when you begin pedaling. Thanks to the motor, e-bikes allow riders to travel farther and faster more easily. That said, the distance and speed that you can cover will depend on the model that you have, the components it’s built with, how much effort you put in, and the assistance it offers.

Can You Ride an Electric Bike Without Pedaling?

If you don’t want to pedal, you can operate your electric bike with the throttle and reach speeds up to twenty MPH. Pedaling is still encouraged, though—and likely necessary for higher speeds and steeper inclines. But if you’re on a flat surface and just want to coast, you can definitely do so without pedaling. Just remember to keep your feet on the pedals at all times to stay safe and stable, and just in case you have to turn, brake, or stop.

How Far Will an Electric Bike Go Without Pedaling?

The distance your electric bike can go without pedaling depends on several factors, including the model of your bike (and its components–particularly the motor and battery) and the condition of your ride. That said, you can expect to get twenty to thirty-five miles depending on the battery capacity and terrain.

Find the best value Class 3 electric bikes at Ride1UP. With affordable prices, you get excellent e-bikes with parts from trusted name-brand manufacturers. Choose from a variety of vehicles, all of which have the option for you to go up to maximum speed without having to pedal!