What Is A Class 1 Electric Bike? 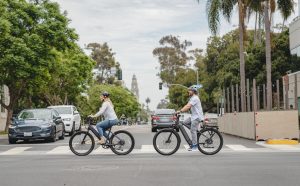 E-bike technology is expanding more than ever before. Now, there is an increasing number of high-tech, innovative models being released every season. So, you might ask yourself, what is a class 1 electric bike? There are options at every price point and for every type of rider. Countries like Europe and China have long been flag bearers of the advantages of e-bikes. The U.S. has lagged behind, until recent years.

Today, the electric bike space is growing immensely here in the states, which also calls for increased awareness of the legislation governing e-bike usage. If you are curious about the electric bike hype, there’s never been a better time to get your hands on one and jump on board.

Also called power bikes or e-bikes, electric bikes are considered one of the most significant adoptions of green transportation today. They employ rechargeable electric batteries that can help you travel at twenty to twenty-eight miles per hour. They also offer low-cost, energy-efficient, and emission-free transportation, which combines with all the health benefits they bring. Ultimately, we argue that electric bikes are very much worth the hype.

Class 1 electric bikes are categorized by being pedal-assist only, with no throttle. This is in contrast to class 3 bikes like our cruiser e-bike, which have a throttle.

The only way to engage these bikes is through good old-fashioned pedaling, so they’re the closest to “normal” bicycles as we know them. These bikes have a maximum assisted speed of twenty MPH, and maximum motor power limited to 750 watts.

Depending on the bike model, you can choose between three to five levels of assistance. Each level has an assigned range of output to the motor, which varies depending on how fast the rider pedals. Some levels can kick in up to a massive 250%, while others might provide a modest 30% to 40% assistance level.

While these bikes are speed-limited and lack throttle, they pack more than enough punch to tackle steep hills and other ambitious terrains smoothly. They’re both safe and easy to use while offering an impressive amount of assistance.

Additionally, class 1 bikes encompass nearly every category of e-bikes. Designs range from aggressive riding posture to sleek commuter e-bikes that provide excellent support. They are also very versatile, and often closely mirror the speed and feel of a traditional bicycle. This means that out of the three classes, class 1 electric bikes are least likely to be restricted by local laws.

Still, it’s important to keep in mind that around twenty-six states have some form of legislation governing e-bikes. This is based on their class, regulating where these bikes can and cannot be ridden. While the laws vary from state to state, a class 1 e-bike is most likely to be allowed on trails and mixed-use bike paths in any state.

To be on the safe side, checking specific electric hybrid bike regulations in your area is always recommended. It is best you comply with all necessary rules and regulations.

What Are the Classes of E-Bikes?

For a long time in the cycling world, electric bikes sat in an awkward legal limbo–a gray area. It wasn’t decided whether they should be classified as bicycles or as a kind of motor vehicle. There is confusion about whether e-bikes are legal in bike lanes or areas like parks, and there is no definitive answer in many areas still.

Today, however, the e-bike industry and a majority of the U.S. states are agreeing upon a broad three-class system to categorize the various types of e-bikes. While the class 1, 2, and 3 systems are the ones most commonly followed, there are still different interpretations of these classes across manufacturers and retailers.

Are you still not quite sure what class your bike falls under and what the legal restrictions around it are? Your best option is to check your local bylaws for e-bike compliance. Of course, the e-bike experts at Ride1UP are always happy to answer any electric bike-related questions you may have. Whether about class 2 e-bikes, class 1 e-bikes, or any others!